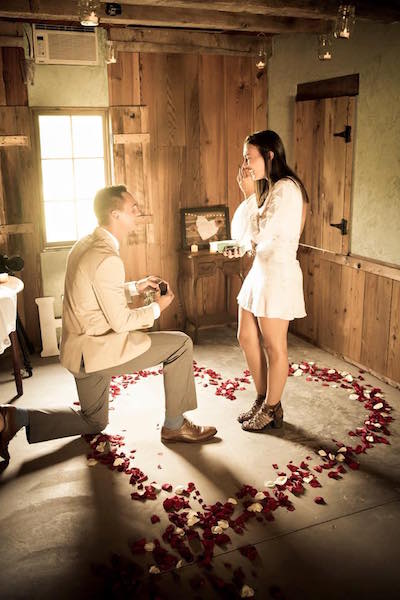 Congratulations to Sam & Hannah on their upcoming wedding!

Hannah and I first met on the track in 6th grade. I instantly felt a connection with her that she did not return. Very few words were exchanged between her and I until we were finally in the same English class sophomore year. It took me half a semester but I finally was able to start hanging out with me and I asked her to be mine on May 8, 2009. After high school we decided to stay together despite going to Wake Forest for soccer and Kent State for field hockey. We just graduated in December of 2014 and our wedding date is December 12, 2015.

Hannah thought that her parents were hosting a wine party at their house on the night of August 7th. She decorated her backyard and made it as beautiful as she could. Little did she know, she was actually setting up for her engagement party that was going to happen later that night. Her parents asked her to go pick up her little brother from a family friend's barn where he was playing. Upon arriving at the barn, her little brother ran to her and gave her a poem that I wrote her instructing her to enter the barn. Inside the barn, the walls were lined with photos from Hannah and I's first date to our most recent, and the floor was filled with rose petals (the barn was also filled with decorations that are better to watch in the video than to read in a description). The petals lead Hannah to a door where I was waiting inside. After she said yes I led her outside where family and friends were waiting to congratulate us (also a surprise). After all the excitement at the barn was over Hannah and I returned to her house to attend the engagement party that she unknowingly set up for herself.